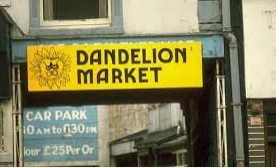 In researching the ‘Diceman’ I was reminded that he used to perform in The Dandelion Market. I also discovered the YouTube clip above, of ‘Driving in Dublin in 1976’ which I thought you might enjoy.

As I am a Northsider I would usually head to Saint Stephen’s green via Liffey Street, the Ha ‘penny Bridge and Merchant’s arch. Definitely the most interesting and scenic route.

Occasionally I might stop off at the very funky Indian fashion shop called ‘Asha’. One of my favorite items of clothing was a long black cotton skirt that I bought that had miniature tiny mirrors sewn into the hem. It also had tiny little bells on the waist drawstring. I was obviously a burgeoning hippy way back then. 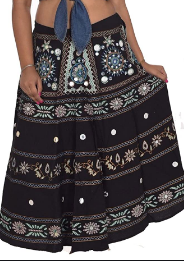 The Dandelion market was famed for its vintage clothing, funky furniture, art and second-hand records. Everyone felt that they were a card-carrying member of the Dublin ‘cool brigade’ just by shopping there. Apparently, it was also the venue for one of U2’s first gigs. Who knew?

Sadly, it closed in 1981 after 11 years. I suppose the best description would have been that it was very similar to Portobello Market in London. Sadly, nowadays there is nothing quite like it.