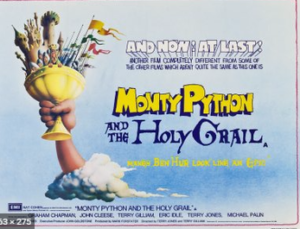 I must preface this blog by stating that my heart and prayers are with those that are suffering and those that have lost loved ones. Over the last week I have mentioned my relief at waking up to a new day with the earth intact.  As opposed to it being vaporized by a meteor shower.   I have also mentioned my relief upon wakening when I realize that the human race has not been ravaged by Godzilla overnight.

I used the term ‘It could be worse’ as something that I remember fondly from a Monty Python sketch. Upon further research I realized that it was in fact ‘I’ve had worse’ which was used in The Holy Grail.

I must admit that I cry laughing every time I watch it.  But not at the obvious dismemberment. But at the first few seconds where the knight’s trusty servant is banging the ends of two coconuts together to mimic the clip clopping of a horse’s feet. This is one of the first few lines in the opening scene of the movie.

The debate concerning birds, velocity and weight ratio is also rather giggle worthy. I have been muttering the expression ‘I’ve had worse’ or ‘It could be worse’ to maintain a modicum of positivity during these times. Merely trying to put everything into perspective for myself when I consider some of the trials and tribulations that I have been faced with over the years.