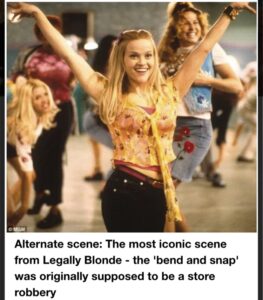 When the post man arrived this morning Buzz and Finn were apoplectic.  Obviously, this is no revelation for dog lovers.  But apparently their behavior is known as a positive reward. In that they bark to make the post man go away and guess what, he always goes away.  So therein lays their reward.

If I ever decide to date a postman this would really mess with their furry little heads as he would be coming into my house as opposed to leaving. But for now, I will keep my romantic notions to myself.

Once they had calmed down, I brought them for a walk. Lately they have begun to do everything in unison. Previously if Buzz peed Finn would also. Now the same applies if they are going for a poo.

Today Buzz had a particularly interesting poo in that his poo was standing straight up. I decided to call it shituesque. For some reason whilst bending down to bag his poo I began to think of the ‘Bend and snap’ scene from legally blonde. I had watched the movie last week.  This is when Reese Witherspoon is demonstrating to her friend, the nail lady, how best to grab a man’s attention by using the bend and snap technique. Here is the link

I managed to resist imitating the move, just about. Reese is trying to get her friend to flirt with the mail man.  Maybe I need to try it with my postman sometime?