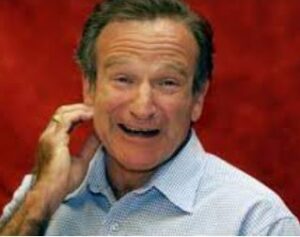 This has to be one of my favorite Parkinson/Robin Williams interviews ever.   His personal take on golfing and the insightful knowledge as to how it may well have been invented is so original and hilarious.

Golf has been and is a popular sport in my family.   However, I have failed to see the allure and have often referred to it as Mr. Twain has when he famously said ‘Golf is a good walk spoiled’.

WPA-Woeful puns alert- The following text may contain cringeworthy puns that the reader may find distasteful.

Perhaps I am spoilt as I have two dogs who get to take me for a walk a few times a day.  We did actually find ourselves on a golf course today.  We were meandering down an unknown path when we happened upon it.  I had decided to meander as I had had enough of sauntering.

To my surprise there was another dog owner on our same path. Here was me thinking that I was being adventurous. Finn spotted the lady dog and became overly amorous.   I began to think that he was literally going for a ‘hole in one’.  I apologized to the owner. Who putt it nicely when he said it was par for the course.

We hit it off and decided to go for a cup of tee as the Howth Castle Food Fayre was in full swing. Green tee was the beverage of choice four us both from the food truck. However, we got caught in the rain and had to shelter beneath a tree which was a fairway away. I shall stand away from the puns now.