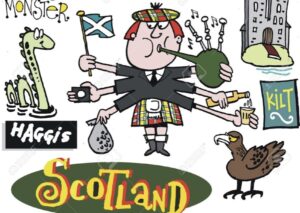 Last night I was watching one of my favorite comedians ‘Kevin Bridges’ on TV.  He is so talented and began touring at such a young age. So naturally enough, when I woke this morning, I decided to be Scottish for the day. After making my tea and giving a treat to Buzz and Finn I announced ‘Ach aye the noo’.  I had tested my accent with them before and was curious to see if their original response would be repeated. They went crazy. Their tails were wagging so much that they almost created a wind vortex in the kitchen.

I adopt a different accent every now and then just to mix it up for the day and keep myself amused. I am not sure that I have the gumption to announce my new nationality to my neighbors when I am out walking the dogs as I have a sneaking suspicion that they may think that I am a bit crazy. I am. Not even a bit crazy. But a lot crazy.

Concealing the crazy takes a huge amount of effort.  Every now and then I have the confidence to embrace it and when I do it is so liberating. But for the rest of the day, I will maybe just ‘Keep the heid’- as they say in Scotland.  Although I plan on watching ‘Gladiator’ tonight and there is a distinct possibility that tomorrow I may decide to be an ancient roman. Carpe Diem.