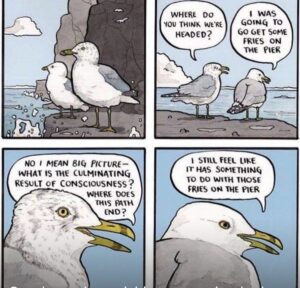 Velvet Strand aka Portmarnock Beach and the sea were beautiful yesterday. As always, it never fails to lift my spirits. People were in swimming, and shrieking with joy as they were doing so. It helps to stave off the cold as screeching loudly takes the attention away from freezing limbs.

Lambay Island is close by, and Howth, flanked by Ireland’s Eye is off in the not too far distance to complete the magnificent view.

Buzz and Finn were up to their usual antics. Finn running around like his ass was on fire and currying affectionate favors with every willing stranger.      Giving me bad press as it may appear he doesn’t get enough attention at home, when he is in fact a cuddle monster. Buzz was forever checking on my whereabouts and was never too far away. My furry security guard.

A seagull took a liking to me and was walking by my side for around 50 yards.    It was so cute and random. I could only imagine that an onlooker might think that it resembled me taking the sea gull for a walk. Or perhaps the other way around.

I was thinking the other day as I gazed at a pigeon that if class system did exist amongst birds that maybe the seagulls would be the royal navy and the pigeons would be the marines. I must give up this thinking lark during this lock down as it’s not doing me any favors.