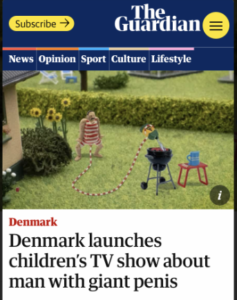 The following may offend. Or make you smile…. I do have a propensity for stories that are bawdy and ribald. I can’t help it. It’s an affliction.

A Danish cartoon for children about a man with a large penis has hit the world headlines for being insensitive. No shit Sherlock. Imagine Mr Bean and Superman morphed together with a giant penis that would get him into all sorts of scrapes.

However, the Danish cartoon character also performs rescue operations and overcomes adversity. It is aimed at four-to-eight-year Olds. The animators defend the show from criticism by emphasizing the fact that it is made for children and therefore cannot be contextualized through the eyes of adults.

Personally, I do not agree with this as I think sex education is hard enough to teach to young children without creating a cartoon character with a mammoth penis.

It did however remind me of one of my favorite characters in ‘VIZ magazine’- ‘Buster Gonad and his unfeasibly large testicles’. 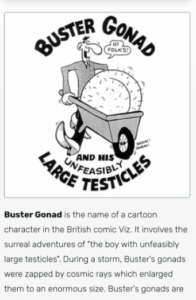 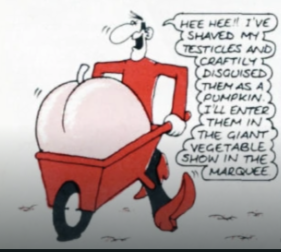 The character Buster has been around a long time as he was created in the 90’s. The story goes that he was hit by cosmic rays which grew his testicles to such a size that he had to carry them around in a wheelbarrow.  This got him into all sorts of bother and embarrassing situations. However, the difference being that this comic and character is aimed at an adult audience and not at children.

The Guardian did reference a comment where there could just as easily been a character designed with a large vagina….    But I think we all know that the connotations for having a large one of these are entirely different to having a large penis. I seem to be on a bit of a roll here with my themes over the last couple of days.  Perhaps tomorrow I will be less distasteful. Although I can’t promise anything.