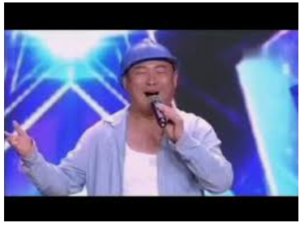 In the development where I live, there is an Asian man that owns a coffee van. I saw him and his van down by Low Rock a few weeks ago. One of my friends advised him to increase his business by going to the swimming spots. While walking past, I noticed that he was singing into his phone at the top of his voice. He was so engrossed that he never noticed me. I loitered nearby, pretending that Buzz and Finn had some important sniffing going on as I was fascinated.

He was singing the ‘Greatest love all of all’ by Whitney Houston with great gusto. It is a difficult song to sing at the best of times and he was giving it all he could. I couldn’t help but think that maybe he was auditioning for one of the talent shows on television. For a moment, I was tempted to ask him if he took requests.

Anytime I see the van now, I smile when I recall the moment. Perhaps someday I will buy a coffee from him and sing him my order. Just to see his reaction. The phrase ‘sing for your supper’ could be rephrased to ‘sing for your coffee’. Imagine if there were shops that insisted on customers singing their orders. I can see us all now singing at Starbucks or Mcdonald’s. Maybe they will dedicate one hour a week to this? I would be well up for it.