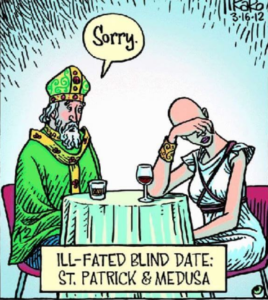 I just had to share this clip. Maybe it will put a smile on the face of anyone nursing a sore head following yesterday’s celebrations. Mister St. Patrick has a lot to answer for.

Little did he know all those years ago when he was banishing snakes from Ireland that he would be the patron Saint of the gargle (Irish slang for booze). He single handedly pioneered a legacy for centuries where millions would wake up the day after his national day with woeful hangovers.  I kinda wish he would have had a go at the rats whilst he was at it. They are just as deadly as snakes.

I forgot how this tickled me.   Kodaline are one of Ireland’s greatest bands. They hail from Swords and have played in Malahide castle. Which is not far from me. And they were awesome.    Bernard ‘O Shea is such an amazing comedian. I think my favorite part of the clip is watching the band members trying to keep a straight face.

Anytime I now hear a ‘Diddly eye’ Irish song I now think of this female battery-operated phallus version.  I was never even a fan of ‘Diddly eye’ music.    But at least I can listen to it now with a wry smile whilst wriggling my snake like hips.   Whilst simultaneously enjoying the delusion that I have snake like hips.