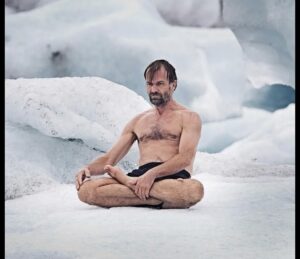 I have to say I am a bit obsessed with The Ice Man- Wim Hof.    His scientifically proven theories for wellness are awe inspiring. They include deep breathing, mind balance and subjection to the cold. He has been immersed in ice for 2 hours as well as climbing Mount Kilimanjaro in shorts. None of these events changed his core body temperature.

So much so that I have been enjoying his breathing techniques as well as swimming in the cold Irish sea. At times I can feel invincible. I have just come in from walking in a storm with the dogs. The extreme weather and gussets of wind (intentional spelling error-makes me smile……) has energized me .   Not to the point where I plan on climbing Mount Kilimanjaro in shorts but enough to have me dancing and head banging to the Prodigy.

My two dogs were gazing at me with their ‘She’s having one of her crazy moments’ eyes. Like I said in another blog entry, these crazy moments are vital for me.

Wim Hof has been injected with the bacteria e -coli with no symptoms.   He has trained twelve others who were willing to be injected with e coli. They were also asymptomatic. He has many other lofty claims that cannot be discounted due to the rigorous research that he has been subjected to.

Some say he is just a crazy extreme athlete Dutchman. And it’s his craziness for me that make his claims all the more plausible. He is a true inspiration.