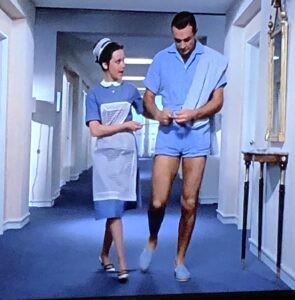 Well, I just can’t stop smiling. I have just watched the opening scene for Goldfinger. And what can I say? I can’t stop seeing it. Sean Connery as James Bond is wearing what can only be described as a giant blue Babygro without the legs.

It says something for the man (RIP Sir Sean) that he is able to pull it off.      Although I am pretty sure that is what he must have done when the scene finished.  I referred to him in a previous blog where I brought the female bond names into question and came up with cheesy double entendre male names.

Harry Styles is probably the only man of this day and age that could wear such a thing. His style does appear to be reminiscent of David Bowie or Eddie Izzard. Whatever he wears he does with such grace, cheekiness and aplomb. I grew up watching Bond and I do believe it set the bar for all other action blockbusters.

Many are looking back at movies, songs and comedians over the last half a century and calling them out for being misogynistic, sexist and homophobic. They were. But at the time the paradigm of political correctness was not as pervasive as it is today. It’s good to see how far we have come. But we still have a long way to go. 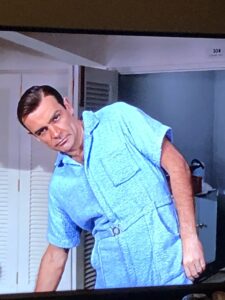 Now, I’m off to find a man that will look as good in a Bond Babygro as 007.Wish me luck.