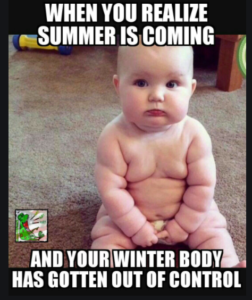 Sarah Millican is a comedy Goddess.  I love her unashamed crassness and wit. Continuing on from yesterday are a few more of my dietary tales of woe.

Other diet tricks are pouring washing up liquid over the chocolate or cake that you have bought to render it inedible.     It is a novel idea and one that I have used once. Although I didn’t use washing up liquid.     I used melted chocolate.  Which may not have been such a good idea.  But it was scrumdiddlyumptious.

Dieting is a multi-billion-dollar industry.      It preys on the weak and the desperate.      Most Doctors will attest to the fact that most of the diets do not work.    As a diet needs to be sustainable for life.   I just wish that the really cute rolls of fat that I had as a baby were as cute now that I am older.     But apparently not.