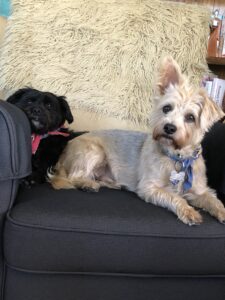 Yesterday I received a lovely surprise. The postman came.  I knew this because Buzz and Finn became feral upon his arrival. Normally the letter is chewed by the time I get to it.

I believe their act is known in canine terms as ‘positive action’.   In that they bark at the intrusion of a postman’s hand through my front door in the hope that he will go away.  And guess what?  He does go away.

If I ever decide to open the front door and invite the postman in Buzz and Finn wouldn’t know what to do.   Anyhoo, I went to the door and to my surprise there was nothing there.  After a few minutes, I went into my bedroom and found a lovely letter on my bed.  Buzz or Finn must have delivered it.

Later in the day I went swimming. Just before we got in two guys who had completed their swim were standing on the rocks and noticed two seals in the sea.   We had never seen seals in the bay before.

When we got in, we were hoping that they might swim up to us but unfortunately, they did not.  When we got out another friend had been standing with the two guys and overheard them saying -I wouldn’t like to have my black wetsuit on and have my back to a seal. When we heard this, we creased up as we imagined the visual.  Maybe they will return. Here is hoping.