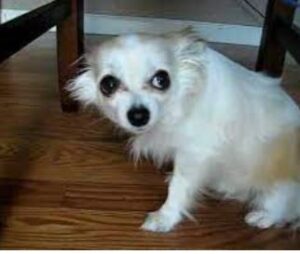 This little fella is so cute.  He has no intention of relinquishing his chicken for anyone. The fact that he has not wolfed it down without any regret whatsoever is what surprises me.  It’s his guilty eyes looking off to the left that kill me.

Apparently, this sideways glance is a real give away for humans too.  They say that when we are asked a question and we look to the left while answering that we are lying.  Whereas if we answer while looking to the right, we are telling the truth.  This little guy is just desperate to eat his stolen chicken. He must have been saying to himself -Scooby doo styley – Dang, and I almost got away with it.

My two Morkie’s would have demolished this tasty prize. Buzz is as gentle as can be 99% of the time when he is taking food but for certain treats like sausages, he becomes feral. Which is fair enough. If someone was considering removing me from my kebab after a night out, I would not take to it lightly.

Whenever I leave a sweet wrapper by my side, he loves to grasp it in a stealth like fashion. Running away with it as though I am going to go running after him. Hardly likely.  I’ve just had my sweets and am happy as a sweet filled Adele can be.

On the other hand, Finn is as gentle as a mouse. Taking the food from me whilst gazing at me with his adorable brown eyes.