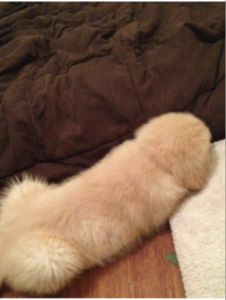 WPA-Woeful puns alert. The following text contains many woeful puns which will make you cringe and grimace simultaneously. The author is unapologetic in this instance for any offence caused.

This is a picture of Buzz that I took earlier.   What do you think?    Seriously though I found it on the internet and found it was too funny not to share.  I mean really?

I have featured a picture in my blog of my beautiful little dog called ‘Finn’, who at an earlier point in his life, was known as ‘4 balled Finn’.   And not because he was able to catch a lot of balls and juggle them.

Many said that I was barking mad to publish it, but I was furry passionate for veterinary and biological research reasons that the picture be shared.   There are worse picture and videos out there. Like this one from TicTok. Ouch….