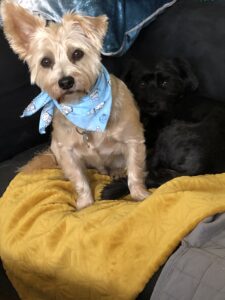 Have you ever heard of the phrase ‘The dogs that poo together, stay together’? No neither have I. Probably because I have just made it up.

It is a known fact that people that live together either in relationships or house/flat sharing often develop similar habits even so far as to become biologically synchronized.  I can recall that when I shared a house with some other girls that our periods began to occur on the same days.

This must be what has happened to Buzz and Finn.  Their bowels are in sync with one another.  Finn has always peed in the same spot that Buzz has peed in.

Sometimes his eagerness gets the better of him and his head is under Buzz’s tail end where he gets a little pee sprinkle.  If it happens again-as in the poo synchronicity-, I shall try and get a video as proof of this amazing biological phenomenon. I may even tell National Geographic about it? What do you think?