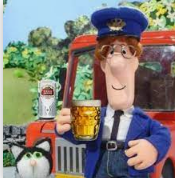 My apologies in advance for the drunken Irish stereotype portrayed in this video.  But, like the story, it did make me giggle.

I was told a story the other day by a friend which caused me to chuckle rather loudly.  There may also have been a guffaw preceded by a snicker. The story concerned a drunken postman.

My friend had married a man many moons ago that she had met on an island whilst on holiday. During her time there the postman became renowned for his love of the drink.

Being called ‘Pat the Pint’ didn’t help either.  She mentioned that by and large he managed to keep his passion for pints under control. But that every now and again she would notice some letters strewn along the roadside as she would be driving to the local farmer’s market.

She knew then that there was really no point in going to the farmers market as they would all be at home sleeping off what was possibly a ‘lock in’ the night before.

This is a phenomenon in the UK and Ireland where the pub owner will close the doors and allow everyone that it already inside to drink to their hearts content until they can no longer walk or talk. Which does pose its own risk as getting people home would always be fraught with difficulty.

Excuse me please whilst I calm Buzz and Finn down from becoming feral as the postman has arrived.