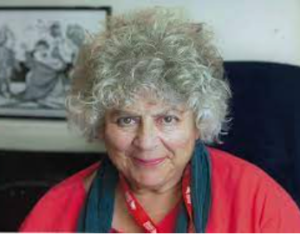 And here it is.  The culmination of my ‘Miriam Margolyes on Graham Norton’ trilogy.  With a fitting end of the original appearance on his show that had everyone ( Including Graham ) in stitches. I shall not tell you what it is about as surprisingly enough it is even too rude for me.

Happy Belated 80th Birthday to this magnificent woman.     Here is a compilation from ‘This Morning’.

Somebody in the comments section on YouTube wrote that they could see the moment that Matthew Perry’s soul left his body which tickled me pink. Maybe it’s the fact that ‘Laurence Olivier’, ‘Cream’ and ‘Knickers’ are all in the one sentence eloquently delivered by an esteemed actress in her magnificent voice.

It’s all just rather unexpected which makes it so hilarious. It was at this point that Graham Norton must have realized that Miriam was an extraordinarily sweet, eccentric and funny guest.   The passing of the fan was what topped everything off perfectly.

Gemma Arterton was such a lady in her support and understanding of Miriam’s experience. `I know exactly what you mean` was exactly the most gracious thing to say.     It is without a shadow of a doubt my favorite video clip.   Not just because Miriam is so disarming and has no filter but for the comedy factor of Graham’s reaction and the other guests on the couch.   I am sure Laurence Olivier is smiling down at her saying ‘Go my girl, you are not the first nor the last that I had that effect on’.