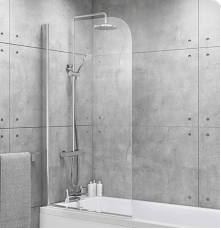 The final weird event was the culmination of all three.   I have always believed that things happen to me in threes.   Both good and bad.   And this was no exception.   This time I was visiting a friend’s house that I have visited many times before.

All was well, we were chatting away and having a nice cuppa. Buzz and Finn were in full WWCF-World wrestling canine federation- mode. Which seems to be a rather entertaining performance that they put on for special guests.

About thirty minutes elapsed when I needed to use the loo.   As I walked into my friend’s bathroom her glass shower screen-attached to a bath- came crashing down.   I had not touched it as I walked in.

It all happened in slow motion and I was waiting to see it shatter into a million pieces into the bath. A bit like my nerves which were shattered as was my friends. Thankfully it did not break.

I told my friend about the previous two weird incidents with things falling and how using sage to clear homes of unsettled spirits was a recommended practice.   She told me that she did not have any and attempted to put my mind at rest by saying that the shower screen must have had a screw loose.

I said that it must be a coincidence as I had a screw loose myself.  My suggestion of travelling with a priest when visiting people was discussed which she wholeheartedly agreed with.