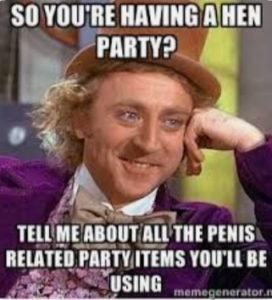 There were 13 in our group. Which meant that after 13 shots and a few more drinkees in between we were all fairly paraletic.    At one point we were all trying to dance the flamenco which got us thrown out of one of the bars.   I don’t think that they appreciated our piss poor and inebriated effort.

Another smutty one was ‘Roses are red, violets are fine, you be the 6 and I ‘ll be the 9’. Which was also a hit with the guy it was delivered to. No surprise there.

One of the girls in our group was a frequent one-night stander as she did not want to be in a relationship. After a few drinks she told me that she had ‘more cocks than a fairground rifle’. Which made me howl laughing.

Her line was ‘Come on you’ll do’ which she loved.  She had a successful one-night stand but told us that she really liked him and wanted to keep in touch with him after the holiday.

She also told us that her suitor broke his collar bone by slipping on the contents of his condom during the night that he had not knotted and failed to throw in the bin.  When he had not called as promised her reply to our concern and empathy was ‘Well there’s no point crying over spilt spunk’ which had us all in stitches again.

Definitely my fav Hen weekend with all the debauchery and giggles to remember.