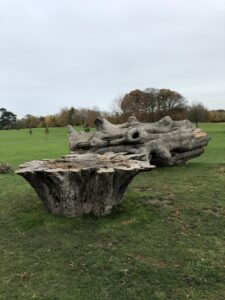 I decided to partake in some extreme lumber jacking today to stave off the November cold.  Once I donned my high viz jacket Buzz and Finn went apoplectic.  They really are not fans of anything high viz.  When I am feeling feckless and see people wearing high viz clothing, I think ‘Look at them, just wanting to be noticed, huh ‘. Then I smile wryly to myself at the silly notion.  The tree was quite a challenge and I rose to it initially but then realized that as I wasn’t a tree surgeon perhaps it would be best left to the experts.

I was reminded of the Monty Python Lumberjack song with Michael Palin. (See the link below)

It’s almost as though The Pythons invented silly (at least for me they did), all those years ago.  Many appear to be reveling in being silly during lock down as some of the memes are hilarious. 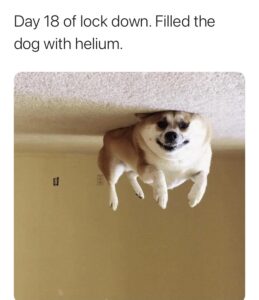 This helium dog picture cracked me up. I hope he is Ok and that he managed to fart and burp out the helium…….