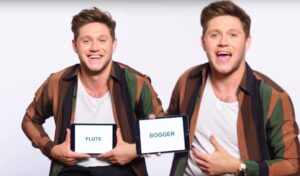 Niall Horan does a magnificent job here with Vanity Fair in explaining our Irish vernacular.

To be sure, to be sure is how we reply to something here in Ireland that we generally do not want to do. It is such an old and unused phrase that when it is used it is done so in an ironic way.  At least it is when I use it.

Asking someone to slow down if they are speaking too fast is best phrased as ‘Stall the ball’. Even if you are not a football fan. As I am not.  Although maybe it refers to many different types of sports that use balls. I am pretty sure that at this point, I am reading far too much into it and I actually need to stall the ball meself.

An establishment that has less than the required standard of hygiene as per food and safety regulations may well be referred to as being ‘Manky’ or even a ‘Kip’.    As in ‘I went into the petrol station for some messages(groceries) and their toilet was a kip.

If the person in front of me in the queue in the petrol station wins some money on a scratch card, he/she would be called ‘Jammy’ (lucky). And if they were served by a person from the country that person would be called a Culchie (Kull-chee).

If the person who won money on the scratch card accidentally throws it in the bin the Culchie behind the counter may well remark ‘If they had brains, they would be dangerous. I never realized that we had such a rick lexicon of phrases and insults in Ireland. Although they are always delivered with our very own inimitable Irish charm.