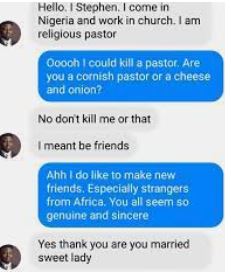 One of the stories that I have heard recently about scam calls is where my friend began to play along and then proclaimed after a few moments ‘You should be ashamed of yourself’ to which she received the reply ‘You rich c*t’ with the caller slamming down the phone.  She was a bit taken back to say the least.

The other story was where someone else decided to play along but subsequently lost his patience and then began to admonish the caller in what must have been a loud tone of voice.

Ok, let’s just say he must have been shouting.   Five minutes elapsed when he then received a call from the supervisor of the scam caller telling him off for speaking to his employee in a rude manner.

These two stories would be perfect scenes for a new up and coming sitcom that could be called ‘Scam Central’ with Dylan Moran, Katherine Ryan and Joe Lycett playing the leads.

And of course, a cameo from none other than Kathy Burke. I can see it all now.  That’s it, I’m off to write the script. Actually, No, I seem to have a message from a Nigerian prince which I must attend to first.

But let me share one of my favorite vids with you before I trot off.

Showing a scammer his own webcam