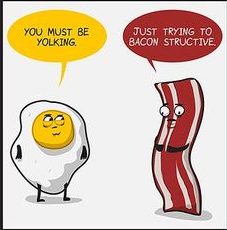 Lately I have decided to open a new page of my Nigella Lawson cookbook- Simply Nigella- every day. Just to expand my culinary repertoire.

I get that food can and is (with the right person) sensual but Nigella takes it to a different level entirely. There are a couple of guys on TikTok called #Menwithpot who also ham up (excuse the woeful pun) their cooking in a forest.

In their posts you never see squirrel’s bungee jumping from trees and robbing their food. Come to think of it I don’t think that I have ever seen a squirrel bungee jump, period. I must pay more attention from now on.

Who knew that slapping chicken would be so enjoyable to watch? I wonder if the staff in Colonel Sanders with his Kenfucky Tried chicken ever slap their chicken.  Oooh, I am getting hungry at the very thought.