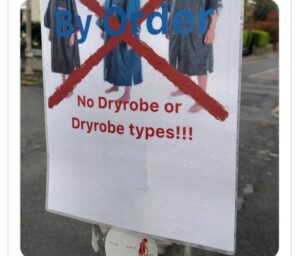 We Irish are not averse to a good ole decent turf war. Considering our country produces the best quality turf. However, the latest is not so much a turf war as a surf war. Meaning the sea swimming Dry Robers vs the sea swimming anti Dry Robers.

So much so that The Guardian featured an article referencing our plight.  In particular the notice erected in Sandycove by an aggrieved anti Dry Rober.

In the large scale of things, and considering our current climate, I realize that this is a first world problem of minuscule importance.  (WPA-Woeful puns alert. The following text may make you cringe and grimace due to the unsolicited use of dreadful puns).

For the swimmers that do decide to shell out the 150-160 euro I can only assume that it must be worth it. They must keep one very very dry indeed.    Although I would like to emphasize that when we all come out of the sea, we are all rather wet and cold. Usually a towel, several layers and a coat have generally succeeded in restoring one to a dry state.

I first spotted a person wearing a dry robe in 2019 and as I had been harboring notions of sea swimming for years, I became quite envious of their emblazoned attire.

This summer I was asked to join two awesome sea warriors in their thrice weekly swim. One of the girls mentioned the Sandycove notice and I immediately understood their perspective. The hippy in me began to deduce that Dryrobes  (because of their cost) were making sea swimming an elitist hobby. This upset me as the sea is such a magnificent free natural phenomenon that surely sea swimming could not incite a surf/class war?

This was my initial reaction and then I decided that there will always be something to divide people and create perceived snobbery. Whether it is cars, earbuds, phones or sportswear. My motto is live and let live.

We are not all the same, and Thank God we never will be. Otherwise, the world would be a very dull place. So what if someone wants to cozy up in their Dry Robe? Can we not be more tolerant, instead of less tolerant, particularly during these times?

Sea swimming can be spine tinglingly cold at times. But also, incredibly invigorating. Whatever floats your boat, just enjoy and Carpe Diem (Seize the day.     I could have said ‘Seaze (Sea-geddit? ) the day, but I resisted, as that would be going too far.

P.S Pun therapy is ongoing but is largely unsuccessful.