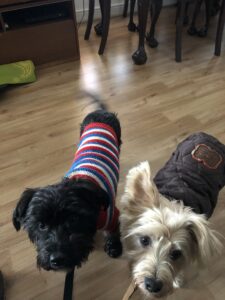 Today whilst putting on Finn’s jumper (as it was freezing, 2 degrees to be exact.) I was singing’ Where’s me jumper’ by The Sultans of Ping.   A seriously underrated punk band from County Cork.   Who obviously have an affinity for mislaying vital items of clothing in hazardous places.

Later whilst walking on the beach a passer-by wittily remarked that Buzz was better dressed than him. He was wearing his lovely new coat (which incidentally he abhors). I was torn between feeling proud and feeling like a gobshite for subjecting my dog to wearing an anorak. In the end the latter won.  I completed my blissful beach walk in full gobshite mode.

I would love to ask The Sultans of Ping where they got their name from?        Actually, I just googled it as my curiosity got the better of me. The band’s name was inspired by Dire Straits and their song ‘Sultans of Swing’. A magnificent song from one of my all-time favorite albums (besides OK Computer by Radiohead).

Prior to googling I initially thought that maybe their song name was derived from the Monty Python ‘The Meaning of Life’ and ‘Machines that go ping’?

It may have been a tad more humorous had it been. By the way ‘Happy Godzilla free Saturday’. It could be worse; we could be ravaged by a monstrous monster type thingy….