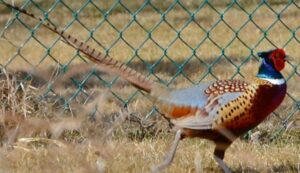 What a day.   I was driving along minding my own business whilst talking to the vet on my handsfree phone. An appointment I had booked needed to be cancelled.

Finn had a sore on his back leg which did not appear to be healing and I had decided to book an appointment at the vet.  Eventually he licked it better which was a relief.  I believe he has learnt his exemplary licking skills from Dr.Buzz, his fellow Morkie.

I screamed down the phone to the vet’s receptionist who was unsurprisingly taken aback.  The thought that I had possibly killed one of the most beautiful birds with my car had put me in a degree of shock.

I frantically looked in my rear-view mirror to see if it was still alive.  To my relief it had survived as it had reached the other side of the road.  Albeit minus a few tail feathers.

When I eventually got home, I felt like shaking my own tailfeather with joy.  And then I realized that I do not have a tailfeather but a fine arse.  Which I shook instead.