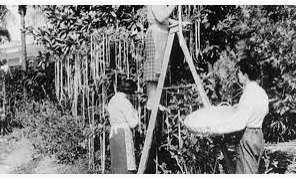 My favorite April fools has to have been the BBC TV show Panorama with their ‘spaghetti harvest’. It happened in 1957.  This was well before I was born and successfully fooled the entire nation.

The fact that it took great creativity and meticulous planning made it all the better. It is often cited as one of the greatest April fool’s hoaxes of all time.

Spaghetti was seen to be growing from trees with ‘Richard Dimbley’ commenting on the rich harvest due to the eradication of the ‘Spaghetti weevil’. What makes it even more unbelievable is that they featured the Swiss harvest and not an Italian one.

I loved spaghetti as a young girl and can recall the BBC airing this 20 years after it had first been seen. I was immediately taken in as I had no idea that spaghetti was actually made and did not grow on trees.

Apparently, I was one of millions that believed the same thing. The planning and effort that must have gone into the report was astounding. Attaching hundreds of strands of spaghetti to several trees to create the illusion that it does grow on trees must have taken forever.

To this day whenever I eat spaghetti, I picture it growing on trees.