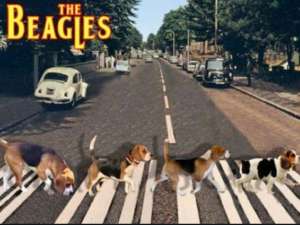 Today whilst walking Buzz and Finn I decided to lie down in the grass in my local park. The sun was shining and the sky was blue.  I was blissing out. I felt something on my hand and looked down to see a little ladybird. It had 8 spots which meant that it was 8 years old.  However, upon further research it transpires that this is a myth as they only live for one year. Who knew?

Finn’s stick burial prior to ladybird experience had me transfixed. His burying skills are imperial to say the least as he had buried one that was twice as long as him. He was in his element.

As I was lying in the grass Buzz began to lick my face and I began to stroke him. His hair was very short and different to touch. Something was not quite right.   I stopped stroking him and looked up. There was a beautiful beagle staring down at me. It has been a long time since I have stroked something that I was unsure of.

The owner was very apologetic. I laughed and told him that I didn’t mind as his dog was really cute and really friendly. A bit like the owner to be honest.

We bade each other farewell and went off about our business.