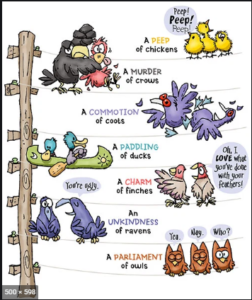 Following on from yesterday’s animal group names I would like to offer the following for your review and comments please.

Whilst walking Buzz and Finn we frequently happen upon several other dogs. This always brings a smile to my face.  To see their collective tails wagging.    The official collective noun is – a pack of dogs. My personal choice would be –Group of dogs- A Wag of Dogs

Here are some other suggestions.

Let me know what you think.