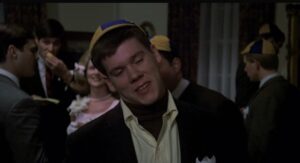 Who knew that famous people resembled mere mortals like the rest of us?  This is the second in a 5-part blog series featuring photos of stars before they were famous.  I adore Kevin Bacon. It is hard not to. I also adore the fact that he is one half of one of the most successful marriages in Hollywood.  ‘Kyra Sedgewick’ is Kevin’s esteemed and also very successful wife. This also reminded me of one of my first 3 blogs referencing Kevin.    Here is the link.

Did you know that Kevin’s last name is double barreled and is actually ‘Bacon- Rind’? I jest, but imagine if it was? Kevin has taken to posting videos on TikTok of late.

We all know that he is most famous for his iconic role in Footloose and his awesome dancing.  When I watched it again, I guessed that he must have been a gymnast before he became an actor.

To my surprise he was neither a dancer nor gymnast and had body doubles for both. The Guardian has also named him one of the best actors Never to have received an Oscar.

‘Six degrees of Kevin Bacon’ was a meme that suggested that all Hollywood actors are connected to each other in some way.  It was derived from the many varied and eclectic roles that Kevin starred in. He later embraced it and set up a charitable foundation that links people and charities to each other.     He is one of a kind, Mr. Bacon Rind.