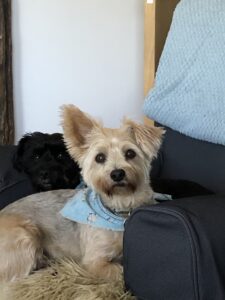 Buzz and Finn are quite playful little pooches. Their nature allows them to get petted and cuddles wherever they go as they are always wagging their tails at strangers. I have mentioned in another blog how Buzz and his barking had been an issue and how I was glad to announce that his barking had diminished greatly.

However, it appears that his barking indoors has diminished and that his barking on occasions outdoors has increased.  I can only imagine that perhaps he has decided on a daily quotient of barking and that if he can’t reach it indoors, he will do so outdoors.  Anyhoo I am still working on it.

A few weeks ago, I was walking them on Malahide beach and a little girl was building a beautiful sandcastle. Finn (in his unfathomable canine wisdom) decided to go up and piss on this little girl’s castle. I was mortified and apologized profusely.   There was nothing that I could do.   Her poor little face. I will never forget it.

Last week I was walking with a friend along Velvet Strand in Portmarnock and we walked past a group of 30 or so people doing a yoga class on the beach. Their Zen was infectious.

Buzz and Finn were playing in and out of the sea. The yoga instructor had a small sandwich board on the sand with the name of her class and her Facebook details.

Before I could do anything, Finn went over to it and pissed on it. Buzz then followed his lead. More mortification. Thank God everyone in the class was laughing.

I offered to take it into the sea and wash it off but the instructor said it was fine. Like Buzz and Finn, I had my tail between my legs as I walked away.