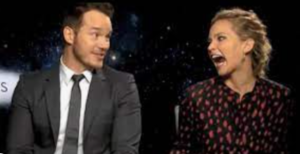 In this video clip Jennifer Lawrence illustrates her ballsy (excuse the pun- actually please don’t as I have been so restrained of late, I feel that I should be allowed to indulge myself every now and then. As I mentioned before my pun therapy is seriously working) sense of humor to perfection with Chris Pratt.  It is always refreshing when a famous actress and actor can demonstrate their lack of ego by not taking themselves too seriously.

I was unaware that ‘roasting of celebrities’ in the US goes as far back as 1950 where they were conducted in The New York Friars Club.  Dean Martin hosted the roasts from 1974-1984 to rave reviews.

They began again in 1998 with Denis Leary hosting.   It is hard to believe that Donald Trump was roasted.   Apparently, he prohibited jokes about him not being as wealthy as he was.

In Ireland we call mocking one another ‘slagging’.  This has nothing to do with the nefarious word ‘slag’.  If you cannot laugh at yourself, you are very much persona non grata.   Often the best way to avoid a slagging is to laugh at yourself before anyone has the opportunity to do so.  I employ this tactic frequently much to my own benefit.