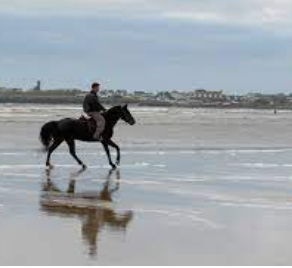 I had the great pleasure of being driven around County Clare last week by a very dear friend.   We were in full ‘Thelma and Louise’ mode without Brad Pitt or any criminal activities.   Which I suppose means that we were not in Thelma and Louise mode at all but in our minds, we were the living re incarnation of those two powerful fictitious women.

We stopped off first in Kinvara where we walked ‘Charlie’, my friend’s gorgeous black Labradoodle, and Buzz and Finn.  The Wild Atlantic Way soon followed as we made our way to Lahinch.  An invigorating beach walk was in order during which Finn decided it would be a good idea to dig a sand hole 2 feet deep.

Two riders on horses appeared much to Finn’s distaste. In his canine wisdom he decided to chase them. They both ran away. And I nearly fell into his two-foot hole whilst trying to chase him.

We stopped next in Doolin off for a bite to eat at Gus ‘O Connors. Driving home by the Atlantic was mesmerizing. When we hit Ballyvaughan at 10pm it was still almost light. Half of the sky was light grey with the other half ink blot black/grey.  The sky was falling down over the Burren and a very still sea. It was like something from a dream.  It was a wonderful end to a beautiful day.